Kowloon Motor Bus Company (1933) Limited (KMB) is one of the largest privately-owned public bus operators in the world. KMB's fleet consist of about 4,200 buses on 400 routes and a staff of over 13,000.

The KMB fare system is pay as you board with no change given but there is an increasing trend to electronic fare system. The entire KMB fleet is equipped with Octopus smart card payment system. KMB operates a bus-bus interchange scheme giving octopus card holders discounts on fares when they change to, from and between different bus routes.

Image:Kmb-102.jpg
TransBus Enviro 500 - One of the newest bus types in KMB

KMB was founded in April 13, 1933 as a result of the reforming of public transportation by the then British colonial government in May 1932. Prior to that point of time, there were several independent bus operators working on the both sides of the Victoria Harbour. KMB franchise allowed for the operation of public omnibus service on the Kowloon side, as well as the New Territories. By June 11, 1933, KMB had a fleet of 106 single deck buses.

The founding members of KMB were:

By 1940, KMB had 140 single-deckers operating on 17 routes. During World War II, only a handful of buses survive the World War II, and using converted trucks (lorries) as buses.

By the late 1940s, KMB ridership increased with the huge influx of immigration during and after the war. In 1949 KMB bought 20 Daimler double-deckers from England, making it as the first operator to work with double-deckers in Hong Kong.

Following the opening of the Cross Harbour Tunnel in 1972, a number of cross harbour routes was jointly operated by KMB with China Motor Bus, the sole bus operator on Hong Kong Island. With the tunnels, KMB service expanded from Kowloon to Hong Kong Island. At the same time, KMB experimented with buses operating without a collector (also referred to as One Man Operated).

KMB is the first franchised bus company in Hong Kong that:

In 2005 Kowloon Motor Bus has a fleet of over 4,300 buses with over 80 percent of the fleet being double-deckers and of that, 80% of the double-deck fleet is air-conditioned:

The KMB Fleet is allocated and spread across four depots across the Kowloon and New Territories and is identified by either the letter L, K, S, and U. These letters are placed on the bottom left of the driver's windscreen, although some of the buses in the fleet still have the letter placed on the exterior above the headlight.

KMB operates 420 routes and are mainly concentrated on Kowloon and the New Territories, with some cross-harbour routes spreading to Hong Kong Island.

The routes are grouped under a logical order, with the hundreds digit being the type of the route, the tens digit being the areal coverage of the route, and the ones being the specific route. There are no zeros leading . English characters are added in front of or behind the route number to differentiate routes of different natures such as Overnight or express, or to differentiate routes of similar routing yet with different destinations. On some cross-harbour routes, buses (typically the older buses) will display a red background on the route information sign so that passengers will know right away that the bus is a cross-harbour route.

Image:KMB-ATR-WanChaiPier.jpg
Bus route 960 is a cross-harbour bus route operated solely by KMB. The photograph shows a KMB bus at Wan Chai Pier - the terminus of route 960.

The system is similar to routes on the opposite side of the harbour, yet the numbers on the two sides are non-exclusive, in such a matter that there are two Bus Route 1 in Hong Kong (and more if you include the minibuses). The boundary is blurring as New World First Bus started to claim routes on the Kowloon Peninsula.

KMB is the sole operator on most of its own routes, but some cross-harbour routes are co-operated with either with Citybus or New World First Bus. No new co-operated routes have been introduced since and no future plans are in the works.

Other joint ventures include: 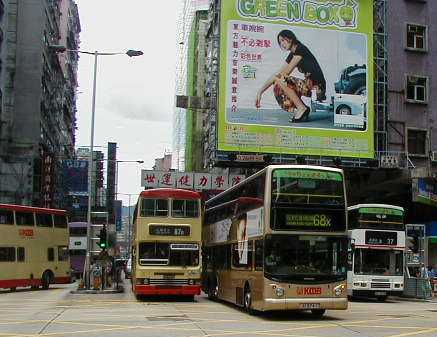 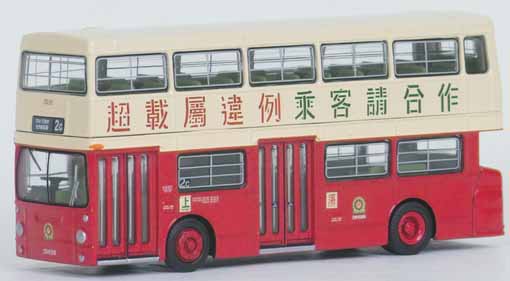