Independence Air is a low-cost air carrier founded in 2003. It is based at Dulles International Airport outside Washington, D.C. Its route network is focused on the East Coast of the United States, but covers an area ranging as far west as California and Seattle. It is unique among low-cost carriers in that its fleet mainly consists of 50-seat regional jets, although the airline now operates larger aircraft as well.

After announcing plans to part with United Airlines, Atlantic Coast Airlines' significant cash position made it a prime target for a takeover attempt. Mesa Airlines launched an attempt at a hostile takeover in the Summer of 2003. Significant SEC violations were committed in the attempt that were vigorously defended in the courts. At the same time the employees of Atlantic Coast Airlines organized a grass roots effort to avert the takeover attempt. Within a few months the stock purchase plan was removed by Mesa Air.

Since its emergence as an independent brand name, Independence Air has become known for offering very low airfares: as little as $29 one-way to Florida. [1] However, the company has dealt with a series of financial problems during its transition. In February 2005, one of its aircraft was repossessed after the company missed a lease payment. [2]

In 1Q 2005, Independence Air lost $105 million on revenue of $91 million. [3] A J.P. Morgan analyst released a report in early May 2005 predicting that Independence Air would lose $183.2 million in 2005, and have less than $5 million cash on hand by the end of the year. The report forecast that United Airlines, AirTran Airways, and other East Coast carriers would stand to gain the most should Independence Air cease operations. [4]

Independence Air plans to emerge from deficits through fleet changes and workforce layoffs. At its inception, Independence Air's small "i-jets" cost the company $0.22 per seat-mile to operate. Low-cost carriers with larger aircraft were able to operate at much lower costs: $0.065 at JetBlue, $0.075 at Southwest Airlines, and $0.11 at US Airways. Independence Air is now taking deliveries of new Airbus A319 aircraft that are expected to reduce operating costs toward JetBlue and Southwest's levels.

As of January 2005, Independence serves 38 airports, compared to 60 served by Southwest and 30 by JetBlue. Additional A319 routes were added in February 2005, with service to West Palm Beach and Fort Myers. Las Vegas was added in March. In April, San Diego was added. In May, Los Angeles, Seattle/Tacoma, San Francisco, and San Jose was added to the network. 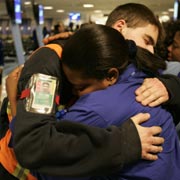