Caesars Entertainment, Inc. (NYSE: CZR) is a Las Vegas, Nevada based business that is the largest owner, operator and developer of hotels and casinos throughout the world. Originally part of the Hilton Hotels chain it was spun off from Hilton in 2000, taking the name Park Place Entertainment. In September 2003 at the annual shareholder meeting a resolution to change the name of the company to Caesars Entertainment was approved and on January 6, 2004 the name change officially took effect. The primary reason for the name change was that management felt that it would help the company to capitalize on the Caesars brand name.

The company no longer exists after it was acquired by Harrah's Entertainment on June 13, 2005.

All of the previous and succeeding company's common stock was/is traded on the New York Stock Exchange.

On June 18, 2004, following approval by the Nevada Gaming Commission, Caesars completed the sale of the Las Vegas Hilton hotel-casino to Colony Capital for $280 million. A Caesars spokesperson stated that the sale would help the company focus on its major casinos on the Las Vegas Strip.

On July 14, 2004 Harrah's Entertainment agreed to purchase Caesars Entertainment for more than $5 billion subject to regulatory approvals. Regulators may require the new company to dispose of several properties, possibly in Louisiana, Mississippi, Nevada and/or New Jersey.

Properties at time of acquisition by Harrahs

Caesars Entertainment is also the name of a Bangkok, Thailand brothel who is being sued by the US company for trademark infringement, on the grounds that the Bangkok Caesars is trying to capitalize on a trademark which they neither own nor are legally licensed to use. 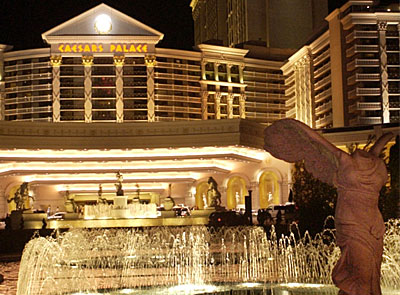