Air Atlanta Icelandic is based in Iceland and leases wide-bodied aircraft on an ACMI (Aircraft, Crews, Maintenance, Insurance) basis to airlines needing extra capacity. It�s prime aircraft are Boeing 747, Boeing 757 and Boeing 767 and more than 30 aircraft are in the fleet. Cargo operations are also included using Boeing 747 Freighters. Air Atlanta Icelandic operates from multiple bases around the world.

Formed in 1986 by captain Arngrimur Johannsson and his wife, Thora Gudmundsdottir, the airline dedicates itself to flying their own passengers and cargo as well. Their first contract came when Caribbean Airways wet leased a DC-8 from them for their London to Barbados flights. In 1988, the airline leased planes for Air Afrique to be used during the hajj pilmigrage trips. This would become an important part of the structure of Air Atlanta later on.

Sudan Airways and Lufthansa were among the other airlines that beneffited from leasing passenger airplanes from Air Atlanta Icelandic during the late 1980s, as well as Finnair, which leased a Boeing 737c plane from the Icelandic company.

It was in 1992 that Air Atlanta Icelandic was able to take passengers to the sky with their own airline operation. Their first flight was done on a L-1011 plane. Later, in 1993, a flight from Pnhon Phen to Bangkok was launched, using a Boeing 737.

Later in 1992, Air Atlanta Icelandic participated in the United Nations peacekeepers airlifting, flying the UN representants from former Yugoslavia to Nigeria and France.

In 1993, the Boeing 747 arrived, and Saudi Arabian Airlines became one of the first airlines to lease that plane from Air Atlanta Icelandic, also for hajj flights. And, after signing a contract with Samvinn Travel, Air Atlanta Icelandic began operating domestic charter flights too.

By 1994, Air Atlanta Icelandic had obtained rights to operate service from many other international countries, including the United States, from where they had a flight to Colombia, and the Philippines, where they were allowed to operate domestic charter flights. About that time, they began to offer flights within Europe for free and began service to Portugal.

In 1996 a couple rented a Air Atlanta Icelandic L-1011 to have a sky-wedding. The couple and their wedding guests were treated to a flight over the arctic circle, while the wedding was performed inside the jet.

1997 saw the arrival of contracts with such airlines as Brittania Airways and Iberia, which would use an Air Atlanta Icelandic plane for its routes from Barajas International Airport in Madrid to Jose Marti International Airport in Havana and to other points in the Caribbean. That year also saw the arrival of the airline's first Boeing 747 SP plane, which would later be utilized by government officials, sports teams and The Rolling Stones, among others.

In 1998, Air Atlanta Icelandic leased planes for British Airways, and in 1999 Mr. Magus Thorrsten was named the company's new CEO. In '99 also, the airline became a fully wide bodied airplane airline, when they sold the last of their Boeing 737's. In year 2000, Air India joined the growing list of other airlines that have leased airplanes from Air Atlanta Icelandic airlines.

Air Atlanta Icelandic still leases their jets to a number of airlines, while providing their own airline flights, taking passengers to such places as Puerto Rico, Kenya, Cuba, Barcelona and the rest of Europe on charter flights. Model airplane wise, Air Atlanta Icelandic has Schabak and Flight Miniatures under contract to produce those types of promotional items for the airline/leaser company.

The Air Atlanta Icelandic fleet consists of the following aircraft (at February 2005): 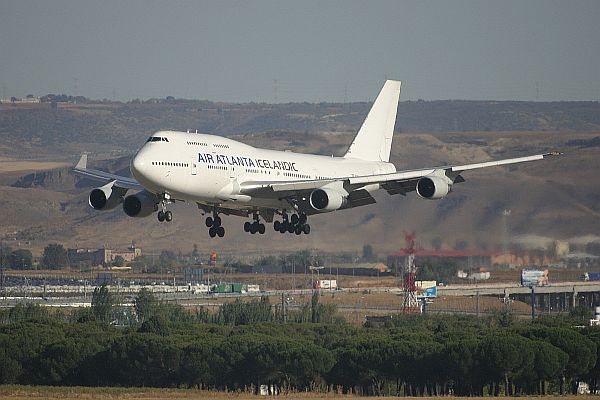