Singapore Airlines Limited (Abbreviated: SIA; _; Hanyu Pinyin: Xīnjīapō Hángkōng Gōngsī; abbreviated 新航) (SGX: S55) is the national airline of Singapore, and the world's second-biggest carrier by market value. It is the leading and founding entity of the Singapore Airlines Group of companies. It has a presence in most parts of Asia and Oceania, as well as major operations in Europe and North America.

Operational members of the Singapore Airlines Group, such as its regional and wholly-owned subsidiary, Silkair, manage flights to secondary cities with smaller capacity requirements, particularly those in Southeast Asia, China and India.

Since 2001, air freight operations have also been hired off to a separate subsidiary, Singapore Airlines Cargo, which took over the entire freighter fleet from SIA, as well as management of the cargo holds in passenger-cargo aircraft. A more recent addition was the low-cost carrier Tiger Airways, which marked the group's entry into the low-cost segment of the aviation industry.

Collectively, Singapore Airlines Group is the world's second largest carrier by market capitalisation, second only to Southwest Airlines of the United States. In addition, Singapore Airlines ranks amongst the top 15 airline carriers worldwide in terms of revenue passenger kilometres according to Air Transport World.

Singapore Airlines is a member of the Star Alliance, which it joined in April 2000. Since 30 March 2000, it has owned a 49% stake in Virgin Atlantic Airways.

The airline owns a similar 49% stake in Tiger Airways, a low-cost carrier flying from Singapore which it founded in September 2004 with Indigo Partners LLC, the investment firm founded by Bill Franke, (24%); Irelandia Investments Limited, the private investment arm of Tony Ryan and his family, (16%); and Temasek Holdings Pte Ltd (11%). Silkair is a wholly-owned subsidiary serving new destinations in Asia and regional connections using Singapore as a hub.

Singapore Airlines purchased 25% of Air New Zealand during 2000. However following the near collapse of Air New Zealand the New Zealand government bought into the airline to rescue it from bankruptcy, reducing SIA's stake to 4.5%. This was subsequently sold in October 2004.

The Singapore Airlines Group has over 50 subsidiaries and affiliates, including: 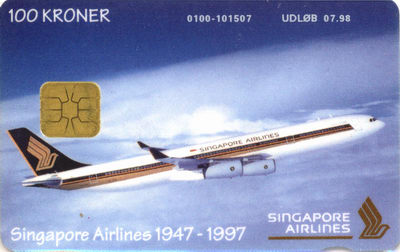